Recognising the significant contribution to the Clare Valley Wine Industry

The Clare Valley Wine Makers Inc. recently announced their inaugural “Legends of the Clare Valley Wine Industry” at the 30th Gourmet Weekend Anniversary ‘Black Tie & Pearls’ gala dinner. These awards seek to honour those individuals who have made an outstanding contribution to the Clare Valley wine industry in the growing of grapes, production of wine, Clare valley brand marketing or other directly related fields over a significant period of time. 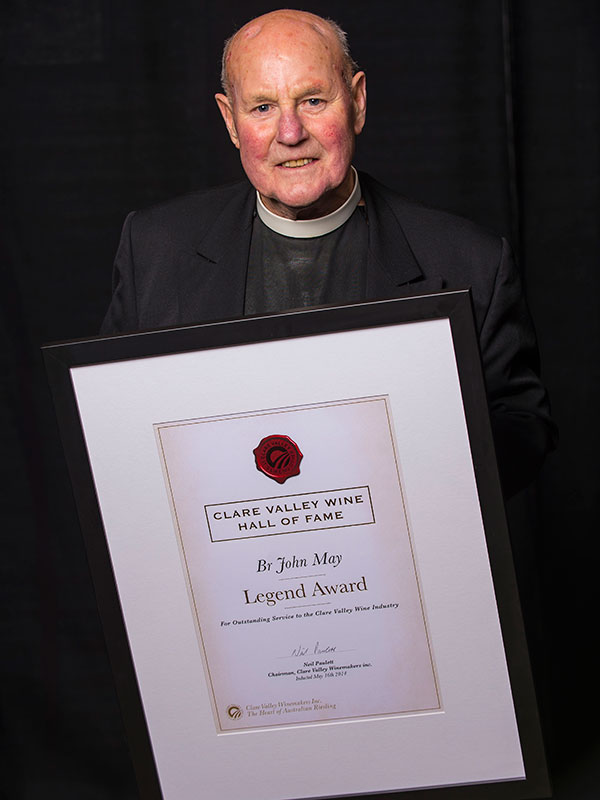 How can you condense a man’s life into 90 seconds? Especially a man like Brother John May who has led such a varied and spiritual life.

Brother John became Sevenhill’s seventh only Jesuit winemaker after the sudden death of Brother Hanlon in 1972.

With a little help in the early days from the winemaking community, particularly Jim Barry and Tim Knappstein, John went on to create award-winning table wines and has shaped the famous Sevenhill Winery into one of Clare Valley’s most iconic, and most visited, destinations.

Additionally, John has contributed to the wine community with his involvement in the Clare Valley Tourism Association, the Vine Improvement and Landc
are organisations, the Clare Valley Winemakers Association, the Regional Grape Growers Association and the National Wine Foundation Board.    John retired from winemaking in 2003, and was recognised with life membership of the Winemakers’ Federation of Australia in 2004.

Even today in his 85th year, John is passionate about the wine industry. As Winemaker Emeritus, he still plays an active role in Sevenhill’s activities conducting public tours which include its history and religious aspect. He also hosts visiting media along with reading and assisting in the church.

Tonight, we bestow another title upon this extraordinary man — that of living legend and an inaugural inductee into the Clare Valley Winemakers Hall of Fame. 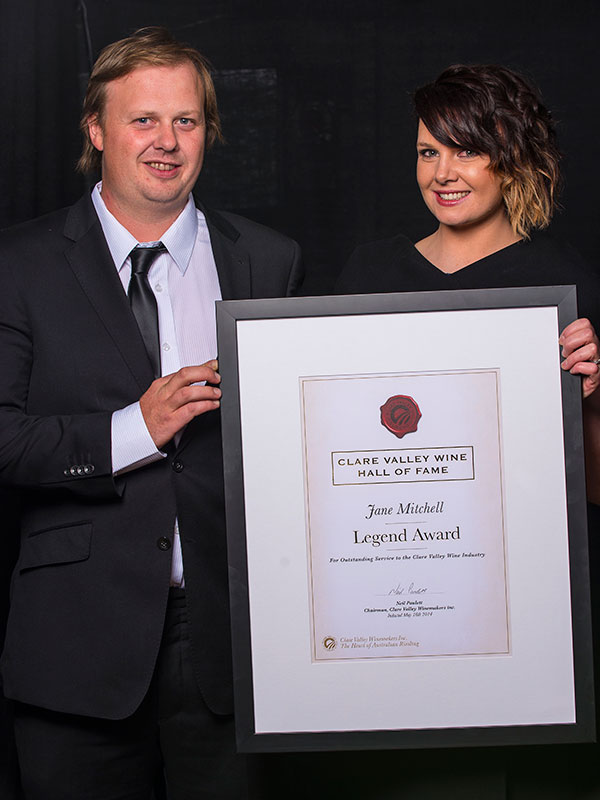 Some say that as a nurse, Jane Mitchell is a terrific winemaker. Not that she wasn’t a good nurse, she just preferred tending vines rather than patients.

Which is our gain because without Jane’s enthusiasm, the Clare Gourmet Weekend might not have eventuated.

From humble beginnings where she and her husband Andrew fermented their first vintage in a rubbish bin forty years ago, Mitchell Wines has gone on to become one of the Clare Valley’s and, according to James Halliday, one of Australia’s finest small wineries.

As well as her role in the marketing and management of her own award-winning winery, Jane has been instrumental in the promotion of the Clare Valley wine region.

Some of her impressive list of a
chievements include:

Jane’s infectious enthusiasm has certainly help lift the profile of the Clare Valley as a major Australian wine producing region and tonight we recognise her achievements by inducting her into the Clare Valley Winemakers Hall of Fame. 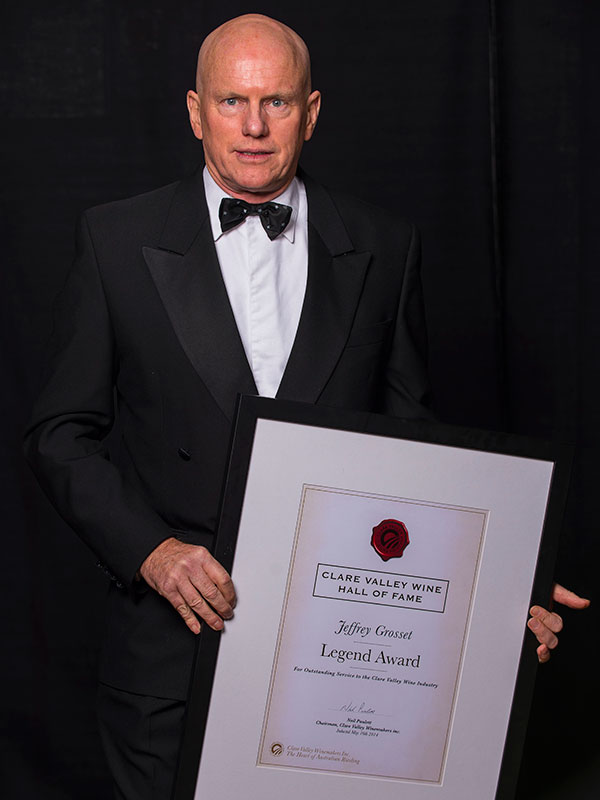 It takes a lot of vision to turn an abandoned butter factory into a winery. But in 1981 a young, determined Jeffrey Grosset saw the potential that today sees Grosset Wines as one of Clare Valley’s greatest triumphs.

Since establishing himself, Jeffery has dedicated his time to the promotion of wine – whether it’s Grosset Wines specifically or South Australian wines in general. Likewise, he is still one of the Clare Valley Region’s greatest advocates.

In terms of achievements, there have been many including:

We can now add to those accolades by announcing Jeffery Grosset as an inaugural inductee into the Clare Valley Winemakers Hall of Fame. 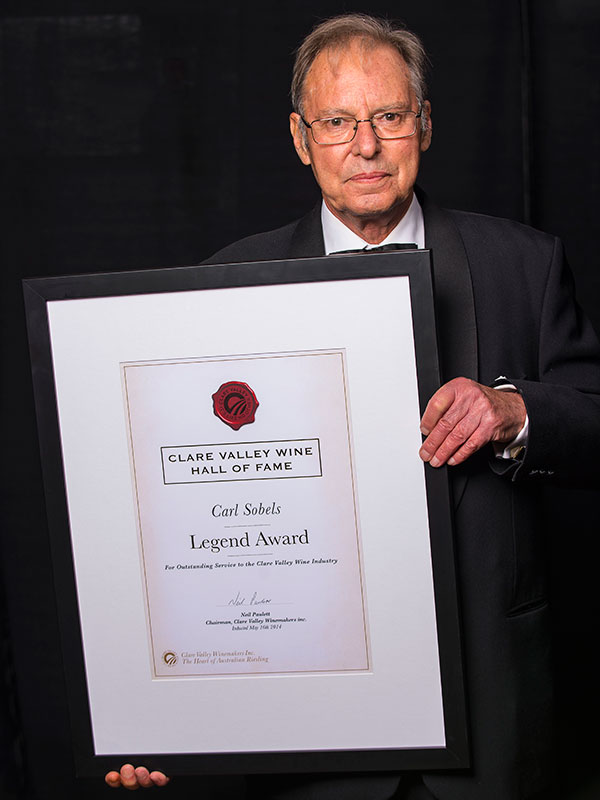 Few will be aware that traditional German winemaking skills came to the Clare Valley as early as 1869 when Carl Sobels brought his family and a unique winemaking talent to the Spring Vale Winery at Watervale.

Success came early to Carl and Spring Valley Wines when, after just one year, its first wine was released. Five years later the winery won a trophy for a full bodied white wine at the 1895 Agricultural and Horticultural Society Wine Show.

With the aid of his Bother-in-Law Herman Büring, Carl bought Spring Vale Wines and set about developing the winery by acquiring neighbouring holdings, increasing plantings and extending its cellars. It was about this time that the Quelltala label began to assume prominence.

In 1910, Herman and Carl converted their partnership into a limited company – H. Büring and Sobels Ltd. Quelltala Wines under Carl’s leadership won prizes, trophies and accolades in London, Bordeaux, Paris, Philadelphia and at home. Carl retired soon after his fiftieth wedding anniversary in 1917 and moved to Leabrook in Adelaide where he died in 1923.

He was a born winemaker and blender who know his grapes, his soil and his wines. Along with his wife Meta, he was dedicated to the welfare of the Watervale community. He was a gifted musician, an accomplished coppersmith and a Justice of the Peace.

Carl’s Sobels’ pioneering efforts are recognised annually with the Carl Sobels Trophy for Best Vintage Section Dry Red in Show and tonight we further celebrate his talents as an inaugural inductee in the Clare Valley Winemakers Hall of Fame. 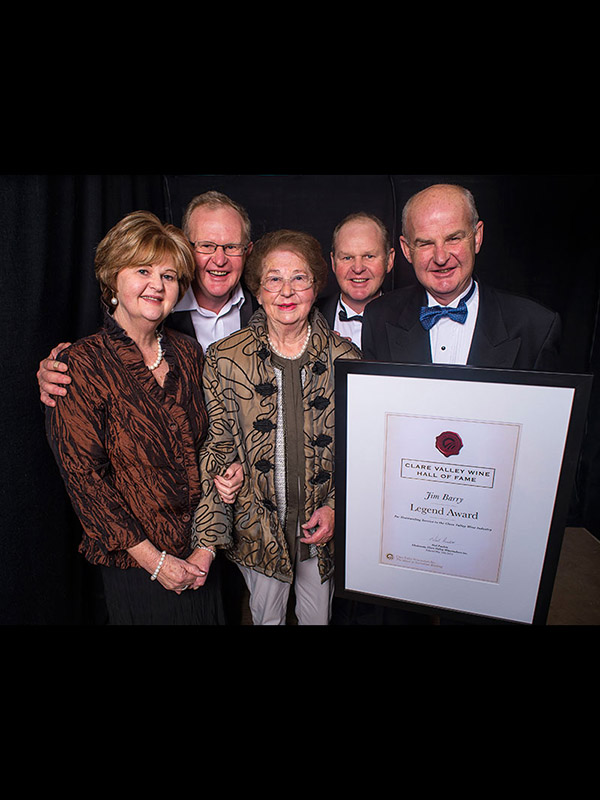 It would be a brave person to pass comment about the Clare Valley and its uniquely beautiful wines without any reference to the legacy left by the late Jim Barry.

As Roseworthy Agricultural College’s 17th graduate and the Clare Valley region’s first qualified winemaker, Jim bought science to Clare Valley winemaking – firstly at Clarevale Co-operative and later at Taylor’s Winery at Auburn before going on to establish his own winery on the northern outskirts of Clare in the early 1970s.

He mentored many young local winemakers in the area, many of which are now legends in their own right, and demonstrated his foresight and innovation by introducing the region to drip irrigation in vineyards. A foundation member of the Clare Valley
Winemakers further demonstrated his on-going commitment to the area.

Jim’s passion for creating great wine and his dedication to his beloved Clare Valley makes him one of the key figures in winemaking, not only in Clare Valley, but in Australia and abroad. 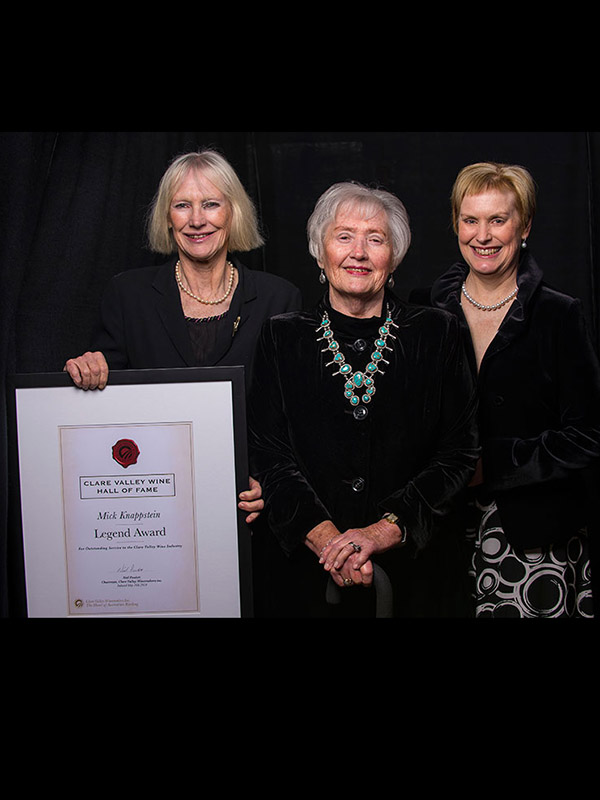 To be respected by your wine industry peers is one thing, but to be respected as one of life’s true gentlemen is quite another — and that’s exactly how most people knew Mick Knappstein or ‘Mr Mick’ as he was affectionately known.

Mick Knappstein’s devotion to wine was instilled at an early age with his father having established the Stanley Wine Company.

However, it was amongst the vines that Mick was most gifted. His passion as a vine grower led to the propagation of premium Riesling in the 1960s — creating and capitalising on the demand for the style.

Drawing on his uncanny ability to read wine trends, Mick experimented by blending table wines in the Leasingham stable. His success with the legendary Bin 56 Cabernet Malbec helped to establish the Clare Valley as noted region for blended red styles.

Mick was determined to remove the elitism from wine and is famed for hosting public educational tastings and winemakers dinners in an effort to demystify the wine making process. It was one of the reasons he was referred to as the ‘people’s winemaker’.    With over 50 active years in the winemaking industry, Mick was a leading force not only in Stanley Leasingham Wines but as also within many wine industry organisations. He was awarded life membership of the Wine and Brandy Producers Association and also received an Order of Australia for services to the wine industry. 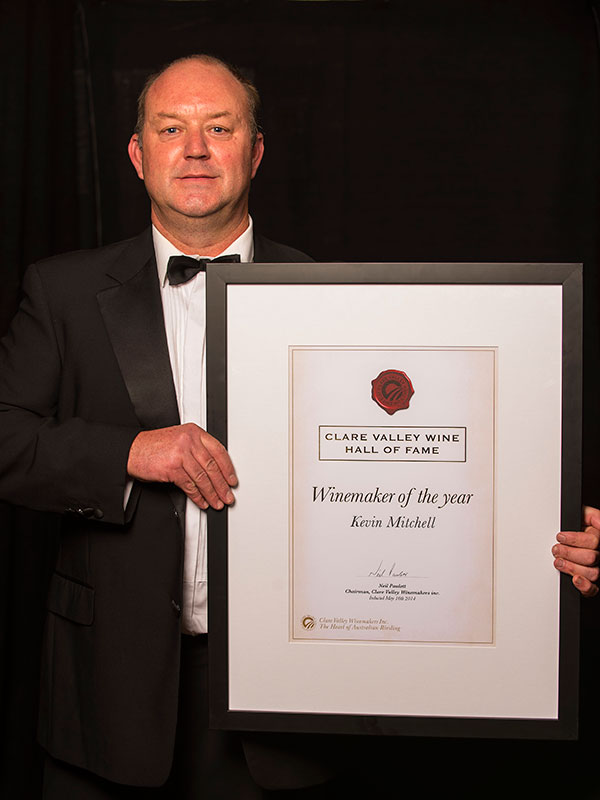 Since then, Kilikanoon has established itself as one of the premium wine brands in Australia winning ‘Best Shiraz in the World’ twice, James Halliday’s Winery of the Year, and countless other awards. Kevin is also actively involved in increasing awareness of the Clare Valley. 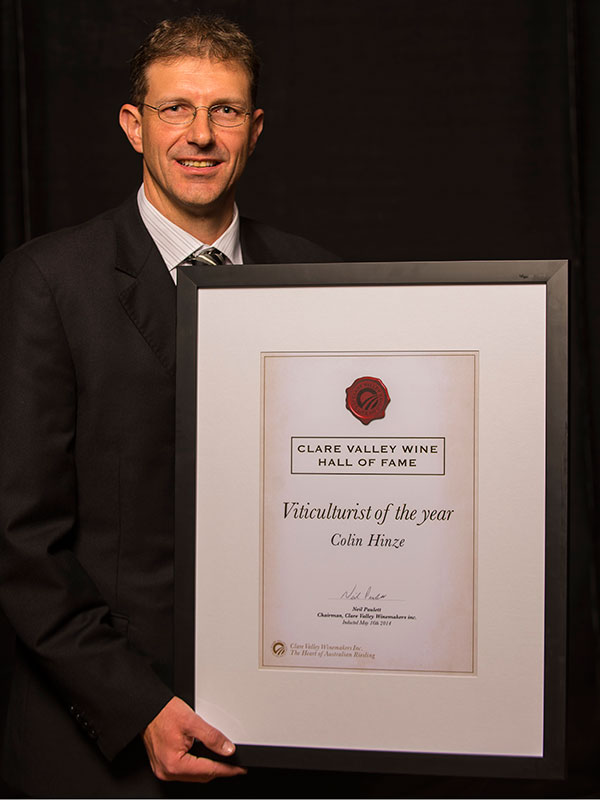 With more than 18-years professional experience in the wine industry, viticulturist Colin Hinze is responsible for the technical management of Taylors Wines premium vineyards in the Clare Valley.

Colin has also partnered with the CSIRO on a number of research projects at Taylors and has shared his research and development techniques with other Clare Valley grape growers. 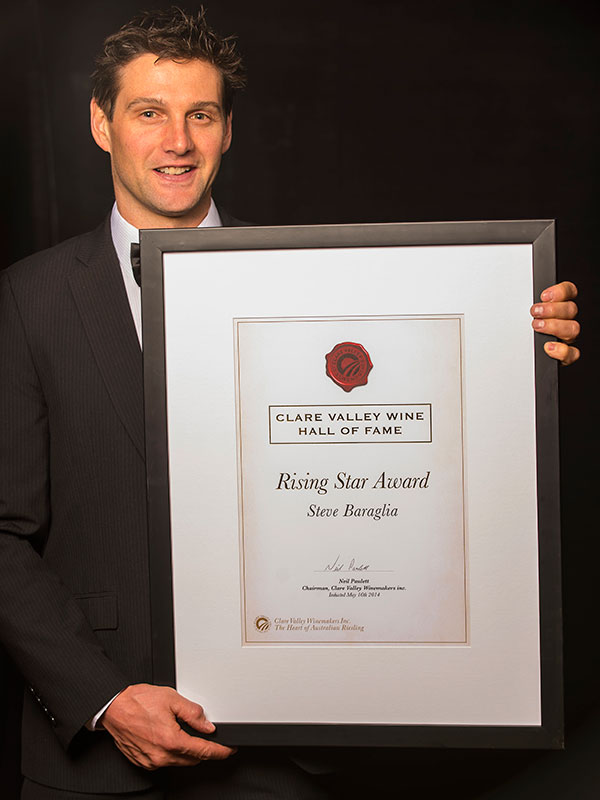 Steve Baraglia’s interest in wine began at his family vineyard at Williamstown.
After gaining degrees in both Winemaking and Viticulture, Steve started at Pikes as a winemaker. Just two years on, he started Naked Run Wines with a couple of mates and later, with wife Laura, purchased the Hill 5 vineyard at Sevenhill.

Over the past 10 years Steve has expanded his experience and technical knowledge in viticulture and winemaking. He is now senior winemaker at Pikes, a staunch Clare Valley advocate and is also in demand as a wine show judge.